When my preschooler Zackary was a baby, he had no discernible sleep schedule whatsoever. On some occasions, he would stay wide-awake and cheerful until midnight. Other times, he would pop out of bed like a jack-in-the-box at four in the morning. Occasionally, he would wake up at about 2:00 a.m. and remain awake for the next three to four hours. Needless to say, I spent most of my time in a state of near-exhaustion.

Finally, when Zackary was ten months old, my husband insisted on implementing an enforced regular bedtime. He overruled my “He’s only a baby!” protests and decided that from that day forward, Zackary would go to bed at nine o’ clock and stay there until we woke up in the morning. The next night, I lay down with him and endured the ten minutes of tears until he fell asleep. By the third night, he was falling asleep almost instantly when we first lay down and was no longer trying to get out of bed when he awoke in the night.

That experience taught me a valuable parenting lesson about the importance of routine in a child’s life. I had thought that since Zackary was a baby, he couldn’t be expected to control whether or not he was tired. In actuality, he needed me to help him learn when to sleep and when to wake up. To this day, I look back at those early days of parenthood and marvel at my naiveté.

Of course, now that Zackary is a preschooler, the routine has become much more complex. It begins at seven o’clock when Zackary sits down to play games with Dad. At quarter to eight, he brushes his teeth, goes to the bathroom and gives his dad a good night hug. Finally, he heads up to his bedroom with me and baby Benjamin. I read two books and then turn out the light. I lay down with Zackary until he falls asleep, both because he is used to it and because it gives me the opportunity to put Benjamin to sleep at the same time. 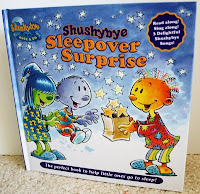 For the most part, the routine was working well for all of us. Most nights, both boys were asleep in about twenty minutes. However, there were still some nights when it seemed as if nothing would settle Zackary down and I was stuck in his bedroom for over an hour waiting impatiently for him to fall asleep. On those nights, I couldn’t help but wish that there were something I could do to help him relax and get to sleep sooner. Shushybye: Sleepover Surprise promised to do just that.

This innovative read-along book and CD set features the fictional land of Shushybye, where the Shushies spend their days making dreams and packing them into dream boxes that the Shushybye Train delivers to children who fall asleep on time. The land of Shushybye and the Shushies are also featured on a hit television series, DVDs and music CDs of original Shushybye songs. There’s also adorable sleepwear, plush toys and even a live concert tour all featuring Shushybye!

When I first received Shushybye: Sleepover Surprise, I was thrilled to see that the accompanying read-along CD was contained in a clear plastic case right inside the front cover of the book. I had been concerned about misplacing the CD, but with the case conveniently incorporated into the book itself, that was no longer a concern. I was also happy to see that the CD contained three original songs. Zackary loves music, and I knew he would enjoy having some added to his bedtime routine.

That night, we sat down to listen to Shushybye: Sleepover Surprise. After a great introduction featuring The Shushybye Theme Song, the book follows the adventures of Dozie, Snoozles and Zeez in the land of Shushybye. When Dozie surprises her friends with a batch of freshly baked cookies, they decide to return the favour by planning a night of music and fun just for her. Even better, they make the dream wishes of two young children come true by taking them along for the adventure!

After the story, two more songs finished the CD. First came the upbeat melody of a song mentioned in the story, Shushybye Blues. The final song was a soothing yet modern-style tune entitled The Shushybye Lullaby. I turned off the lights when the story was over and lay down with the boys to listen to the songs. The music was the perfect way to settle down at the end of the day, and, sure enough, both boys were asleep about fifteen minutes after laying down.

Though Shushybye: Sleepover Surprise is designed to be the perfect night time book, Zackary happily carried it down from his room the next day and requested that I put on the CD for him. He sat down in the living room and cheerily followed along with the story. For the next few weeks, he periodically requested Shushybye: Sleepover Surprise during the day. I was thrilled that he was enjoying the story so much, but my favourite use for the story was definitely to prepare Zackary for bed.

Shushybye: Sleepover Surprise shows an incredible attention to child-friendly details. The lyrics to the brand-new song, Shushybye Blues, are included on the final page of the book so that children can sing along and the colorful cover of the book glows in the dark. Zackary loved the glowing book and happily pointed out the stars, moon and house that were depicted. 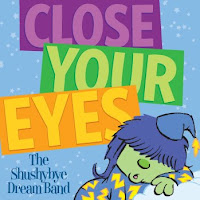 I also received the new Shushybye music CD, Close Your Eyes. This great CD contains 11 fantastic and original songs. Despite the name, this is not a drowsy CD. The modern beats are designed to help introduce children to different styles of music while still promoting the Shushybye bedtime theme. It’s a great choice for any time of day, and Zackary loved the mix of both energetic and mellow tunes.

Since receiving Shushybye: Sleepover Surprise, Zackary and I have used it regularly as one of our favourite bedtime books. If I could, I would insist on reading it every night because I have noticed that when we finish our night with Shushybye, Zackary consistently falls asleep quickly. We have both become big fans of the Shushies, and I have no doubt that they will remain a family favourite for years to come!

Win It: One lucky reader is going to win their own Shushybye: Sleepover Surprise Book and CD Set

Disclaimer: The product/s mentioned above have been given free of charge from the manufacturer or PR firm for the purposes of this review. Opinions expressed belong to Mommy Kat and Kids and are NOT influenced in any way. Please view full Terms of Use and Policies