As regular readers may already know, I love to cook, and I often experiment with different recipes and cooking styles in my quest for great new dishes to serve my family. One of the things that I love so much about summer is that I get to take my love of cooking outdoors by preparing fresh-off-the-grill barbeque meals. Our house is incredibly old and poorly ventilated, so when the full heat of summer arrives, cooking indoors is almost a form of torture. Preparing a delicious barbequed meal lets me keep the house cool while exposing my family to some great new taste sensations.

Of course, inevitably, my husband and children begin to tire of the inevitable burgers, hot dogs and chicken that I prepare. Even steak eventually becomes less of a treat as the summer wears on. So when I was given a chance to test out some of Sobeys’ scrumptious new Summer Fresh and Easy recipes, I jumped at the chance. 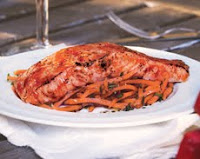 I chose to prepare the Maple-Planked Salmon with Carrot Slaw and the Glazed Mochachino Ice Cream Cake from the mouth-watering assortment of recipes. I picked up all of the necessary ingredients from my local Sobeys and planned out my meal.

As luck would have it, my mother and her fiancé happened to be visiting us over the weekend, so I decided to prepare the dishes for Sunday’s lunch so that I could see what my extended family thought of the meal. I read through the instructions thoroughly to be sure that I had enough time. Since the ice cream cake needed to freeze for at least four hours after assembly, I decided to make it first so that it would have plenty of time to freeze.

The crust of the cake was made by combining chocolate chip cookie crumbs and fudge sauce. I pressed the sticky mixture into a springform pan and then set it in the refrigerator until I was ready to fill it. I left the ice cream sitting out for ten minutes as the recipe directed and then pulled out the crust to begin assembling the cake.

This dessert was so quick and easy to prepare! I began by spreading a 1L tub of Sensations by Compliments Natural Vanilla Ice Cream over the crust. I then drizzled on a little fudge sauce and spread a 1L tub of Sensations by Compliments Mochachino Almond Fudge Ice Cream over the first layer. Finally, I poured the remainder of the fudge sauce over the top of the ice cream to cover the cake and sprinkled on toasted slivered almonds.

I probably would have done well to refreeze the vanilla layer before spreading on the second tub of ice cream, but I wanted to make sure the cake had ample time to refreeze, so in my opinion, the small amount of melted vanilla that leaked out of the springform pan was a small price to pay. I popped the completed cake into the freezer and started to prepare the maple-planked salmon.

The first step in this recipe was to soak the Compliments Maple Grilling Planks in water for a minimum of two hours. I had approximately three hours before mealtime, so I set the planks in the water-filled sink and weighed them down with a heavy bottle. An hour before mealtime, I mixed together barbeque sauce and maple syrup to create a marinade and arranged my salmon fillets in the sauce. I popped the dish in the refrigerator and relaxed until just before mealtime.

About ten minutes before I wanted to start cooking, I peeled six carrots for the carrot slaw. I decided against julienning the carrots, and wasn’t really looking forward to shredding them by hand either. Fortunately, I remembered my food processor’s grater attachment. Within five minutes, I had the four cups of grated carrot that I needed for the recipe. Creating the slaw was then as simple as adding olive oil, balsamic vinegar, kosher salt and freshly ground pepper.

I pulled the planks out of the water and placed them on the preheated barbeque. After about five minutes, when the wood seemed to be smoking well, I arranged the salmon pieces on the planks and closed the barbecue’s lid. As the recipe directed, exactly twelve minutes later I opened the barbeque to baste the fish with a touch more sauce. I then cooked the fish for another ten minutes and carried the planks into the house to serve my masterpiece.

I place the fillets on individual servings of carrot slaw and presented my family with their plates. The tanginess of the balsamic vinegar that seasoned the carrot slaw was a perfect compliment to the sweetness of the maple syrup on the fish. I loved the flavor that the wood grilling imparted to the salmon, and I was blown away by how easy cooking with the planks had been! 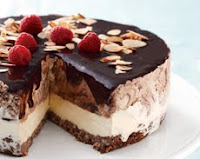 When everyone had finished their main course, I pulled out the ice cream cake and cut pieces for everyone. With a few fresh raspberries to add color, the cake looked as great as it tasted. The toasted almonds added an amazing flavor to the cake, and even my mother, who has always detested the taste of coffee, found the ice cream cake to be absolutely amazing.

I was definitely pleased by how easy the Sobeys’ Summer Fresh and Easyrecipes were to prepare, and how absolutely amazing the food tasted. The only change that I made to the original recipes was substituting Original Sensations by Compliments barbeque sauce for the Maple barbeque sauce that was called for in the recipe. Despite my best efforts, it turned out that my local Sobeys didn’t carry that particular variety, so I substituted the basic sauce and trusted that the flavor of the maple syrup would still be noticeable. I was incredibly pleased with the end result, and really liked the smoky flavor of the original sauce.

I have a fair bit of cooking experience, but these recipes were simple enough that even a beginner cook would be able to prepare them without any problems. The decadent flavors belied the quick and easy preparation and the generous portions left everyone feeling satisfied. Burger and hot dogs are great summer foods, but to really impress your family and friends, try out some of the wonderful Sobeys Summer Fresh and Easy recipes for yourself. You’ll be sure to enjoy many delicious summer days!

Learn More: To find these amazing summer recipes or get other information about Sobeys, visit the online site now

Disclaimer: I received a gift card from Sobeys in order to be able to prepare the recipes listed above. Opinions expressed belong to Mommy Kat and Kids and are NOT influenced in any way. Please view full Terms of Use and Policies