Scooters are one of the best ways to help kids stay active. They’re easy to learn to use, can be played with indoorss and out, and come in all kinds of fun and colourful designs.
But when it comes to buying scooters for kids, the choices can be overwhelming!

Wondering what scooter is best for your kids? I’ll go over the features of some of the top scooters I’ve tested below, and share my favourite five picks for scooters for kids based on your child’s age and needs. 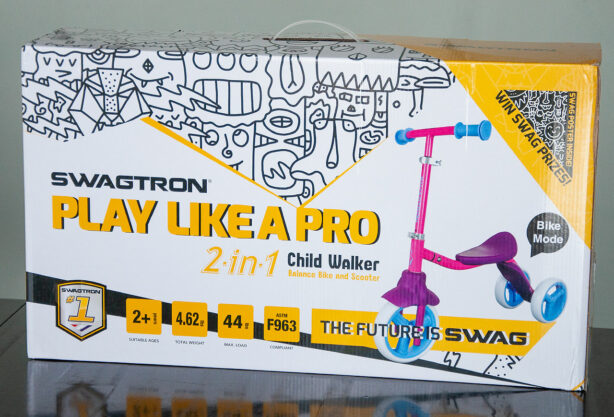 END_OF_DOCUMENT_TOKEN_TO_BE_REPLACED

If there’s one thing I’ve learned since having kids, it’s that kids love personalizing their possessions. Whether they’re putting stickers all over a toy box or adding a fun tag to a backpack, there’s really nothing better for a child than accessorizing their favourite things so that they can always proudly say, “That’s mine!” And the newest fun accessory for kids to personalize scooters, tricycles and more is here! Scoobits are fun silicone bands that are designed to fit around the front bar of a scooter, bicycle or tricycle to add that special personalized touch to a child’s favourite riding toy. I couldn’t wait to check out these fun new accessories for myself.

Now neither of my children actually have a scooter, but Zackary has a custom-made tricycle that is the talk of the town and is so cool that it has resulted in him riding a trike for a little bit longer than most kids usually do. I knew that he would love the opportunity to give his trike even more pizzazz.

I let Zackary and Benjamin each pick out their favourite Scoobit to review. Benjamin immediately chose the Puppy Scoobit; he loves “ruff ruffs” more than any other animal! Zackary took just a glance at the collection before noticing the cool orange Scary Monster Scoobit. The monster resembles one of the ghosts from the Pac Man games and Zackary instantly started jumping around and yelling, “I want the ghost! I want the ghost!”

When the Scoobits arrived, both boys eagerly pulled out their own special Scoobit and sat down to examine it up close. Benjamin immediately wanted to put his Scoobit on his wrist like a bracelet, and the accessory actually fit on his two-year-old hand quite well! Zackary asked to wear his Scoobit as well, but the strap on the Scoobit wasn’t quite long enough for his bigger wrist. So instead, we headed outside to see how the Scoobit looked on his tricycle. The Scoobits are designed to fit perfectly around the bars that are used for scooters and most other riding toys. Zackary’s black and orange Scoobit looked so good on his flat black vehicle and it definitely added some extra personality to his already-cool trike!

I really liked the fact that the Scoobits were made to be weather-resistant so they will keep looking like new even after they are exposed to the elements. They also make identification easier, though with Zackary’s trike, that’s not a problem we have! Overall, Scoobits were a fun, easy and unique way to accessorize my boys’ riding toys (and wrists). Why not pick out one or two for your child and send them out to ride in style?

Win It: Five lucky readers are each going to win their choice of any two Scoobits

To Enter (mandatory): Visit the Scoobits website and leave a blog comment about which Scoobit is your favourite, then let me know you did using the Rafflecopter form below