It’s slightly bewildering to me to live in an age when toys are often bought and discarded in a matter of months.

We had plenty of toys when I was a child, but most of them were carefully treasured and enjoyed for years before finally being packed away for younger children to use one day. Only the most dilapidated toys were ever discarded, and most were kept for years.

In fact, my collection of stuffed animals remains with me to this day. As a result, I have a natural distaste for the disposable mentality that children seem predisposed to in our modern times.

So when my son expressed a desire for a sock monkey, I was thrilled. What could be more timeless and enduring than the irresistibly friendly sock monkey?

Thankfully, I discovered SockMonkey.net, a fantastic website dedicated to providing customers with as much sock monkey related information as possible.

SockMonkey.net carries both pre-made sock monkeys and a variety of fantastic DIY sock monkey kits. My crafting skills are not exceptional, so I was both excited and anxious when I was given a chance to review the Deluxe Pre-Sewn Do It Yourself Sock Monkey Kit.

I crossed my fingers and hoped that my so-so sewing skills would suffice to give my son the sock monkey he’d been longing for.

When the kit arrived, I immediately pulled out the step-by-step instructions and looked them over. The sock monkey’s body and legs are made with one sock, while the other sock provides the pieces for the monkey’s arms, tail, ears and mouth.

The first step in making a sock monkey is marking the lines of the pattern on the socks and then sewing along the lines.

In my pre-sewn kit, the seams were already sewn and the sock was ready to be cut apart into its separate pieces, but the pattern was simple enough that I don’t think I would have had any trouble sewing the socks myself with my sewing machine.

I cut the pieces apart, turned them right side out and stuffed the body and legs, arms, tail and ears.

Putting the monkey together involves some hand sewing, and the kit included the necessary white thread and a fantastic round-point needle that helps make this kit safe for even the newest sewer.

I sewed up the opening in the body, and then used the included red yarn to create the monkey’s neck.

Once I had the yarn secured, I sewed on the monkey’s arms, ears and tail. I really liked how easy it was to sew the pieces onto the body thanks to the weave of the sock.

I don’t have very much patience for hand sewing and I wanted my son’s monkey to be durable. Securely attaching the body parts was much easier than I had expected it to be, and the rounded needle was so easy to push through the sock’s material.

The mouth was the most complicated part of making the sock monkey. I followed the advice on the instruction sheet and sewed the bottom of the mouth onto the face first before stuffing it and sewing along the top.

It took a bit more time than attaching the other body parts but it wasn’t difficult and when I was done, my monkey really did look like a monkey!

The final step was to attach the button eyes and add nostrils and a mouth using the included black embroidery floss. I had never done any embroidery before, so after I sewed on the eyes, I went online and looked up a simple straight stitch to create my facial features. 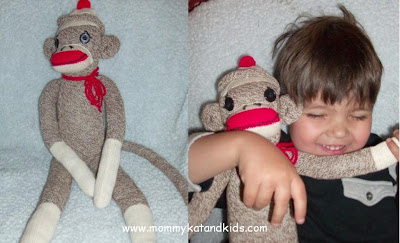 With that, the sock monkey was complete! I worked on the monkey for a couple of hours an evening for two days before finishing, so the kit could easily have been an afternoon project.

I couldn’t believe how good my sock monkey looked when it was done, and I handed it to my son with pride.

Zackary immediately named his monkey “Gump Gump,” and we filled out the enclosed SockMonkey.net adoption certificate together to officially welcome Gump Gump to the family.

SockMonkey.net carries a great variety of pre-made and accessorized male and female sock monkeys, mini sock monkeys, sock monkey socks and various Do It Yourself kits.

The site also contains free patterns and links to the very best sock monkey books, websites and information. Any fan of the sock monkey will find something to enjoy at SockMonkey.net!

Overall, the Do It Yourself Kit from SockMonkey.net was wonderfully easy to follow, and I could not believe how great the finished product looked.

The entire family has fallen in love with Gump Gump. Zackary is often found dragging him around the house happily. The baby loves to scuttle-crawl over to him just to grab and chew on his tail. Even my husband is sometimes found carefully picking Gump Gump up off the floor and arranging him neatly on our couch.

The fact that I made him myself makes him so much more special to all of us, and his timeless charm is undeniable. If I can make such a great looking sock monkey, then I believe anyone can. All it takes is a bit of time, a bit of love, and one of the fantastic kits from SockMonkey.net!

Buy It: To purchase your own kit or any of the other fabulous products at SockMonkey.net, shop online now