I have spent my entire life in Saskatchewan, but my husband was born and raised in Quebec. His parents both spoke only English, but he was educated in a French school and eventually spent years in Montreal and Quebec City, which helped him to refine and perfect his French vocabulary and pronunciation. When I first met him, I was so excited to learn that he was fluent in two languages. In our diverse North American society, knowing another language opens up a world of opportunity.

My sons, as of yet, have had very limited exposure to any other languages. Zackary has twice visited with some of his extended family that speak only French, and Benjamin has had one such visit, but they are not getting the kind of constant exposure that would allow them to begin understanding the different words and phrases. I desperately want to encourage them to start exploring other languages, so I was overjoyed when I was given the chance to review the award-winning DVD series Kids Love Spanish.

This amazing series contains seven DVDs that cover basic Spanish vocabulary ranging from animals to food to simple phrases. I have always loved the language and I was so excited to see if Zackary would be able to pick up any of the words. I put on the first half-hour disc, Basic Words, and sat down to watch it with my son.

The DVD opened with the Kids Love Spanish theme song and a brief introduction by the hosts, sisters Julie and Krisse. The DVD then covered basic words such as house, dog, cat, water, milk, mother, father and baby. Each word was repeated multiple times by both the hosts and by other children. The text was also repeatedly flashed on the screen, and visual examples of each word helped to illustrate the meaning. From hola to perro, Zackary happily repeated each word as it was introduced and had a great time trying to guess what the words meant before the hosts translated them into English.

I liked the fact that the children shown were of all different ages and had pronunciation that varied a bit from child to child. Zackary is at a stage right now where he really likes to get things “just right” and if he isn’t confident he can do so, he will sometimes hesitate to even make an attempt. The children’s energetic repetition helped him feel secure enough to try repeating the words on his own without worrying about pronouncing them perfectly.

I also really enjoyed the visual representations of each item and how they were incorporated into the lessons. When the children were pronouncing casa, some were shown standing in front of a house while others spoke as they leaned out the window of a playhouse. When Zackary inevitably asked, “What does that mean, Mom?” I was able to point out details on the video that led him to the answer on his own rather than just having me give him the translation.

I was happy that Zackary had enjoyed watching the DVD and repeating the words, but I also wanted to know if he would retain any of the words that he had learned while watching Kids Love Spanish. Imagine my delight the following day when I put on the next DVD in the series, Alphabet and Numbers, and before sitting down Zackary asked me for a glass of agua!

The Kids Love Spanish series is recommended for children between the ages of two and eight, but are often fun for the entire family. The DVDs are offered both separately and as a boxed set. The available discs are Basic Words, Alphabet and Numbers, Family, Food, Colors and Shapes, Animals and Basic Phrases. The complete collection will give children a solid base of Spanish words and phrases with which to start building their vocabulary. Thanks to Kids Love Spanish, Zackary has now reached the point where he can combine words to more properly express himself. “Leche, por favor!” he will say cheerily as he uses a word from the first DVD and a word from the last one to make a more polite request. 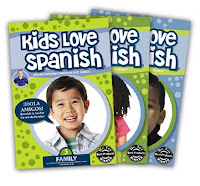 I am also amazed at how much I am learning myself by sitting down and watching with my son. I did have some knowledge of the basic Spanish words already, but I was amazed by how many I didn’t know or had forgotten. And many of the simple Spanish phrases are completely new to me and so handy to know!

I am very impressed by how much Zackary enjoys the Kids Love Spanish DVDs. He happily sings the theme song every time I put on a disc before settling down to watch the video and repeat the words. I love hearing how many words he is able to identify before a definition is given, because it lets me know that he is learning about the relationship between the English and the Spanish word and remembering definitions on his own. But my favorite thing about Kids Love Spanish is those wonderful times when the DVD is over and he will use the correct Spanish word to refer to something!

Kids Love Spanish is the perfect low-pressure, entertaining way to begin to introduce the concept of a second language to a child. The DVDs will help children grow accustomed to the sound of another language as they learn useful words that will help to set the groundwork for future learning and maybe even eventual fluency. Research has shown that early exposure to a second language increases confidence, creativity and cognitive skills. Take the first step to bilingualism and try out Kids Love Spanish today!

Buy It: To purchase any of the great DVDs in the Kids Love Spanish series, shop online now

Win It: One lucky reader is going to win the complete Kids Love Spanish boxed set worth $100!

Disclaimer: The product/s mentioned above have been provided free of charge from the manufacturer or PR firm for the purposes of this review. Opinions expressed belong to Mommy Kat and Kids and are NOT influenced in any way. Please view full Terms of Use and Policies