When I was young, I had a lot of trouble learning to tie my shoes. Long after all of my friends had mastered the concept of “the rabbit running around the tree and jumping into his hole,” I was still using the less efficient method of making a bow out of each lace and tying them both together. I don’t know why I found it such a difficult concept, but for some reason shoe tying just wasn’t a skill that came easily to me. 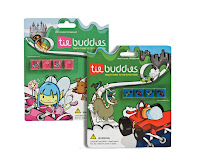 At four years old, my son is still a few years away from the age when children usually start to work at tying their shoes. But he already has a great head start thanks to a set of amazing little devices designed to help children learn to tie their shoes quickly and easily. Tie Buddies are small squares of plastic that fit onto shoelaces and help to create the loops that so many children have trouble with. I was delighted when I was given a chance to review a set of Tie Buddies and see for myself just how they worked.

I received a set of boy’s Tie Buddies printed with race cars to review. To make it easy for children to remember which lace went where, there was one red car and one green car for each shoe. Zackary was delighted when I opened the package and happily studied the four small race cars in their package as I pulled out a pair of shoes.

The only shoes Zackary owns that have laces are his soccer shoes, so despite the fact that he isn’t using them at the moment, I decided to put the Tie Buddies onto the shoes and see if Zackary could pick up the tying method. Of course, that meant that I had to test it out first so I knew what to tell him!

The initial act of putting the Tie Buddies onto the laces is done by an adult. The devices are slightly wider at one end, and I followed the instructions and made sure that the widest portion of the Tie Buddy was at the top. I threaded the lace up through the hole nearest the shoe and then down through the farther hole, making sure I pulled the lace tight so no loop remained at the top of the Tie Buddy. Then, I repeated the process with the other three laces. As recommended, I left between three and four inches of lace between the last shoe eyelet and the Tie Buddy.

Now that the Tie Buddies were in place, I was ready to tie the shoes! The initial crossing over of the laces was done while holding the ends of the laces and was performed in the exact same manner as regular shoe tying. One that step was complete, it was time to try the Tie Buddies. I held one Tie Buddy in each hand. Then, I crossed the left Tie Buddy behind the right one, pulled it to the front and looped it down through the hole. When I then pulled the two Tie Buddies away from each other, the knot tightened and I had a perfectly tied shoe!

The action was basically the same as the initial crossing of the laces, but thanks to the Tie Buddy the end result was the secure yet easy to undo tied shoelace that I had had so much trouble mastering as a child. Once I saw how easy it was, I knew I had to sit down with Zackary to see what he thought of the Tie Buddies.

He was thrilled by the small race cars on his shoes, and listened with interest while I explained how the cars drove by each other and then the red one zoomed to the front and raced through the hole. He followed along with my help, and when the time came for the cars to speed away from each other, he did so energetically and I was thrilled to see that he got the same great results I had!

There’s no doubt that it will take Zackary some practice before he masters shoe-tying, but thanks to the Tie Buddies, he is already having a much easier time learning the skill than I had as a child. Tie Buddies would make the perfect stocking stuffer for a child that is ready to learn to tie their shoes, and the cheerful designs on the devices mean that they’re as fun as they are useful. To make shoe tying an enjoyable and easy learning experience, check out Tie Buddies today!

Win It: One lucky reader is going to win their own set of Tie Buddies for their child

Bonus Entries:
· Like Mommy Kat and Kids on Facebook (bonus good luck karma for recommending the site to your friends!)
· Blog about this giveaway with a link to this post
· Grab my button
· Like Tie Buddies on Facebook
· Follow Mommy Kat and Kids on Google Friends Connect
· Subscribe to my blog by RRS Feed
· Subscribe to my blog by email (2 Entries)
· Grab the Holiday Gift Guide 2010 button
· Follow Mommy Kat and Kids on Twitter and ReTweet this: RT @mommykatandkids #Giveaway Tie Buddies Children’s Shoe Tying Aids-Great Stocking Stuffer!-ends Dec. 7 http://bit.ly/bvGVbx (can be Tweeted once daily for extra entry)

Disclaimer: The product/s mentioned above have been provided free of charge by the manufacturer or PR firm for the purposes of this review. Opinions expressed belong to Mommy Kat and Kids and are NOT influenced in any way. Please view full Terms of Use and Policies