Fall weather came early to Saskatchewan this year, and I have a feeling that the chill of winter isn’t far behind. In fact, we’ve already had our first (now melted) snowfall!

And while winter does have its own charm, it also signals the start of cold and flu season! With two school-aged boys and a baby in the house, that means I’m on high alert for those coughs and sniffles.

That’s why I like to make sure I have Echinaforce Junior in the house! These chewable tablets are suitable for children two years of age and older, and contain fresh echinacea root and herb.

Echinacea has been clinically proven to help both prevent and relieve cold and flu symptoms, and I love that it’s gentle enough for my boys to use every day when a cold is going around.

But recently, new studies have shown that Echinaforce Junior may be even more beneficial than was previously suspected!

A study recently done by the University Hospital in Zurich followed 203 children attended by 13 physicians. The results found that children who took Echinaforce Junior had fewer upper respiratory infections and were 64% less likely to develop complications from those infections (bronchitis, pneumonia, etc.).

Even more impressive, though, was that the study also found children that took Echinaforce Junior were 74% less likely to need antibiotic treatment when ill! Since resistance to antibiotics is becoming a bigger and bigger problem, I’m happy to use anything that helps minimize the chances my boys will need them!

And as much as I love that echinacea can help keep colds and flus at bay, my boys love that Echinaforce Junior tastes great! The little tablets have a natural orange flavour and a melt-in-the-mouth texture that makes them feel like a treat. 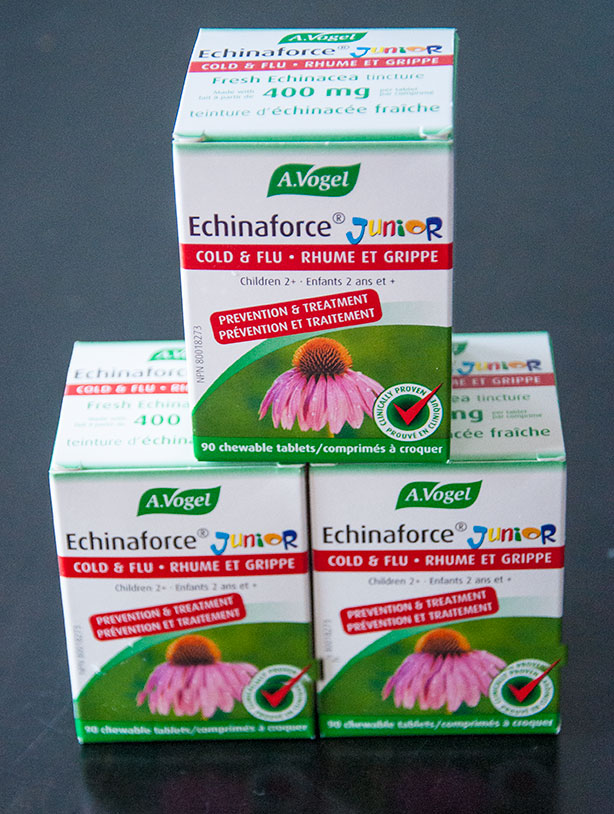 To help your kids take on cold and flu season, the makers of Echinaforce Junior are offering one lucky Mommy Kat and Kids reader their own bottle, a $20 value! To enter to win, just leave a blog comment with your best tip for avoiding colds and flus.

And for other members of the household, remember that Echinaforce also makes products for adults, including liquid, tablets and even a sore throat spray! All of the Echinaforce products except the sore throat spray are safe for use by pregnant or breastfeeding mothers, and all contain fresh, organically grown echinacea.

Echinacea can be safely taken for up to four months, so I always stock up before cold and flu season starts so I’m ready for that first wave of illness. With a little luck, and some help from Echinaforce Junior, we may just be able to make it through winter without cold and flu slowing us down!