On our recent visit to Louisiana, I knew I wanted to get outside the cities and explore some of the history of the Southern state. The glitz and energy of New Orleans is appealing, but there’s also so much to learn when in the area. 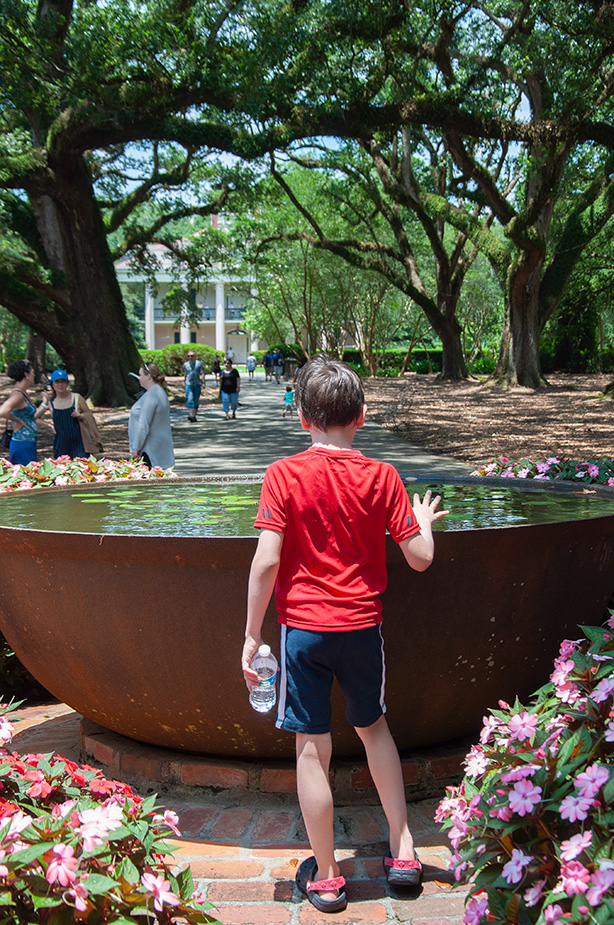 Visiting a plantation was one of those educational experiences that I knew I didn’t want to miss. Louisiana plantations, unlike those in other Southern states, mainly grew sugarcane. And due to the state’s Creole influence, the plantations of New Orleans themselves have some unique features. 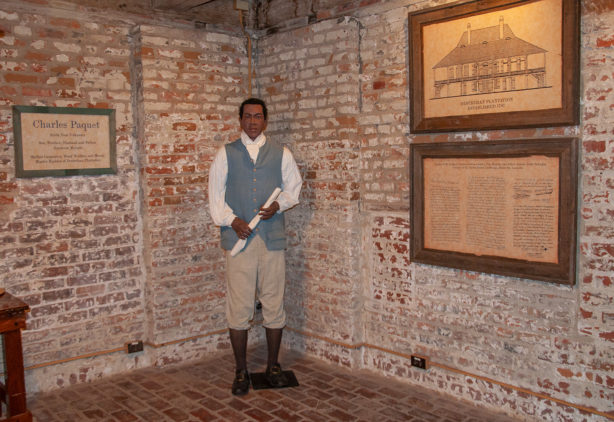 My family had the chance to visit many different plantations in the New Orleans Plantation Country area, and if you’re planning a trip and wondering which one or two you should visit, look no further. These are my thoughts on four of Louisiana’s most popular plantation tours.

If you prefer exploring at your own place, the Oak Alley Plantation in Vacherie, about an hour outside New Orleans, is a great choice. Once inside, you’re free to roam the grounds at your leisure, taking the guided tour of the great house whenever you like. 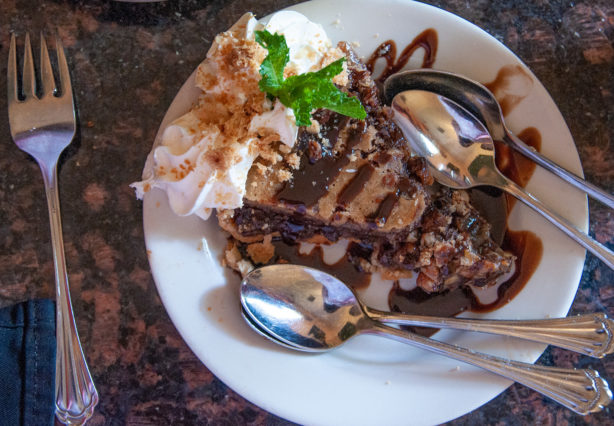 First, make sure to enjoy a delectible lunch at the Oak Alley Plantation Restaurant. Featuring locally-sourced products and traditional Louisiana cuisine (including mouth-watering chocolate pecan pie), it’s a delicious chance to discover what makes Creole and Cajun food so popular. And don’t miss trying the Mint Julep flight! The Mint Julep is a staple in Louisiana, and the flight lets you sample three varieties of the delicious drink. 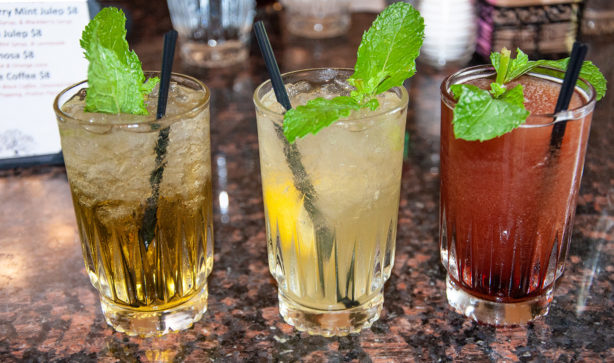 Then, explore the grounds of this immense sugar cane plantation and visit the slave cabins, featuring information about the slaves that lived and worked there. I was especially fascinated to learn about how a slave known only as Antoine created the entire commercial pecan industry when he was the first to successfully graft paper shell pecans. 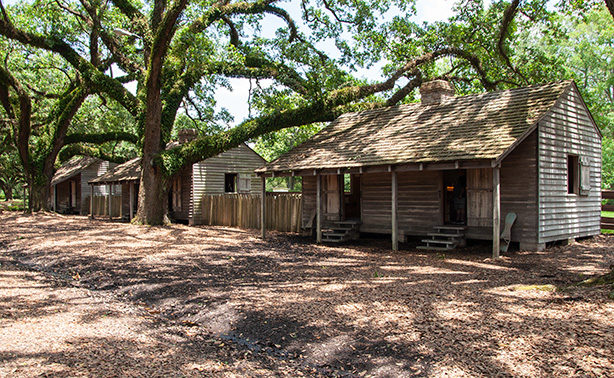 For my boys, however, it was the wall of names that made the biggest impact. This wall in one of the eight reconstructed slave cabins featured the names of the 198 men, women and children enslaved at Oak Alley from 1836 until emancipation. Seeing the names and knowing that so many of those people have stories that we’ll never know was a moving moment for all of us. 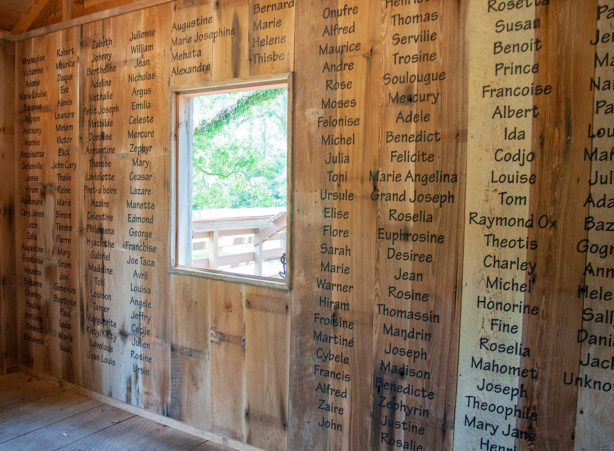 After touring the slave cabins and grounds, visitors can take a guided tour of the Oak Alley great house. Tours start every 30 minutes, so it’s easy to join in whenever you’re ready. This gave us our first chance to see how the plantation owners lived, and learn about some of the unique ways the Southern people managed to deal with the stifling heat. 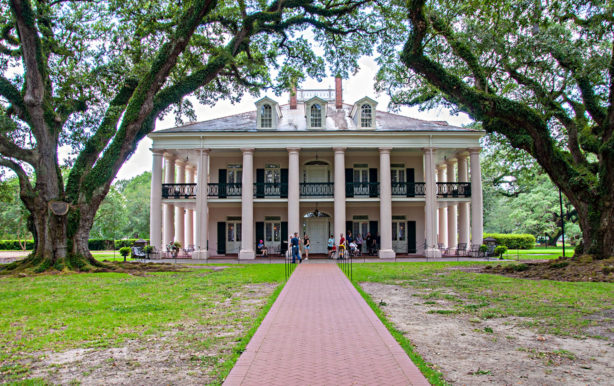 The tour ends with a view of the double rows of 300-year-old live oaks that give the plantation its name, and it truly is one of the most beautiful sights imaginable. Looking out from the balcony is a peaceful moment, but also a sobering one; neither the house nor the oaks would be there without the slaves that were forced to spend their lives ensuring the plantation owner’s comfort. 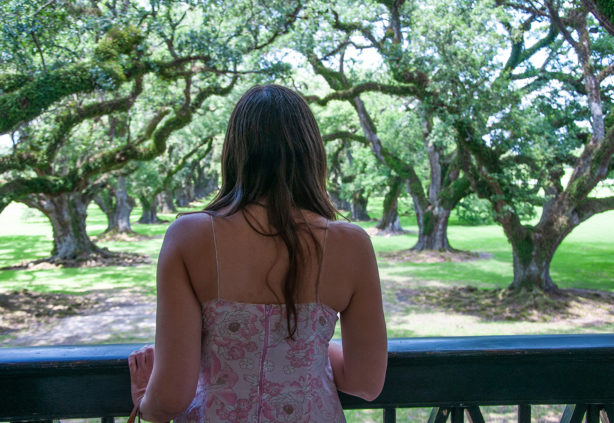 One of the most unique things about the plantations of New Orleans is the difference between Creole plantations and those owned by Americans. And there’s no better place to get a feel for that difference than at the Laura Plantation. 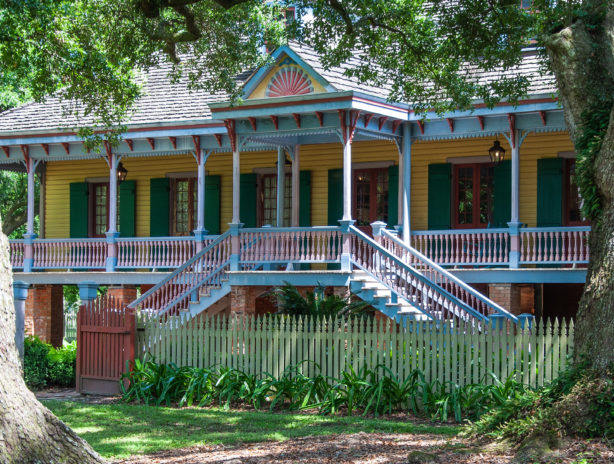 The Creole house design features distinctive architecture and the Creole people, too, were different in many ways. Their idea of slavery was initially more based on class system than on race. Slaves might be First Nations, European or African; the Creole society was essentially one of Feudalism, with the slaves at the bottom of the ladder. 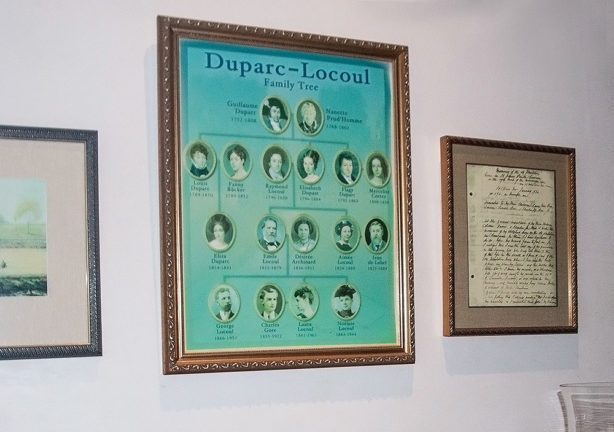 Because of the French influence, slaves in Louisiana also tended to have more rights than slaves in other Southern states, including the right to marry, the right to a day of rest each week and the right to buy their freedom or the freedom of other slaves. And to Laura Locoul, great-granddaughter of the plantation’s first owners, slavery was something to be questioned, not accepted blindly. 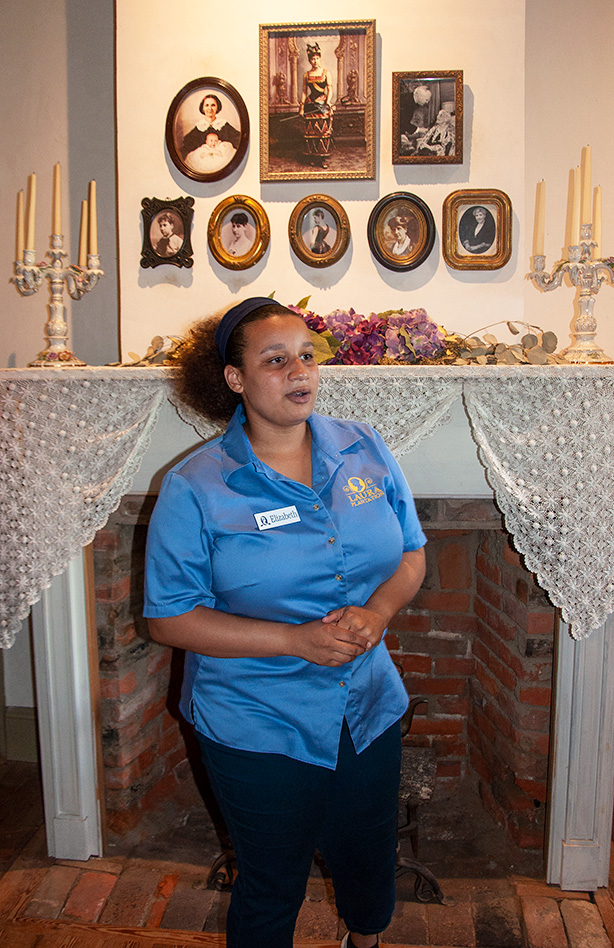 The most interesting part of this tour, for me, was hearing our guide share some of the stories from Laura’s life on the plantation, as written in her memoirs. The Laura Plantation was run by four generations of Creole women, with Laura being the last. And the unique dynamic of a Creole family is seen in the house itself and in the stories told by the tour guides. 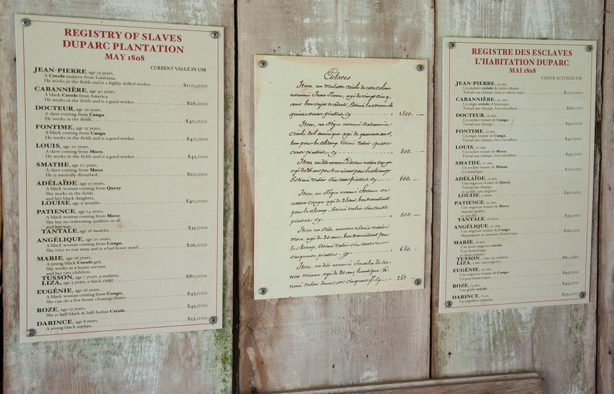 Laura’s grandmother was a harsh woman. She ran the plantation for 47 years after the death of her husband and brothers, and treated the slaves with callous indifference and sometimes outright cruelty.

But Laura’s parents and Laura herself, who was born the same year the Civil War broke out, showed a caring and compassion for the slaves on the plantation that was quite unusual at the time.

The Laura Plantation has the unique advantage of having Laura’s memoirs as a source of information and inspiration. Her complete account, which was discovered in 1993, is available in the book Memories of the Old Plantation Home. 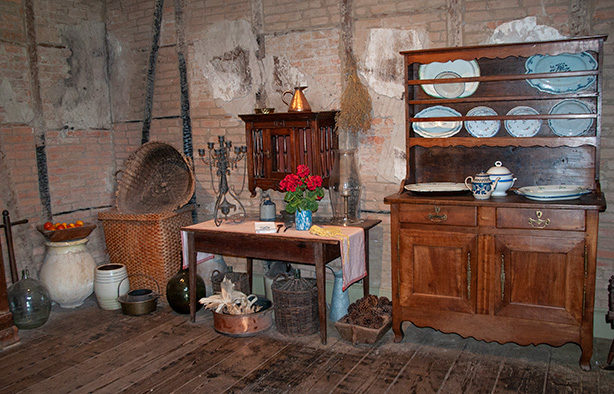 The book is a fascinating read for anyone interested in the life of the Creole plantation owners and the enslaved, and taking a tour of the Laura Plantation offers a more in-depth and detailed window into the lives of the families and slaves that lived there. Those personal stories are sometimes heartbreaking and horrifying, but also offer a glimmer of hope for a better future.

The Creole families that helped create Louisiana left a lasting mark on the state that’s still seen today in all kinds of ways. And taking a tour of the Laura Plantation is a great way to understand that influence a little better.

The Destrehan Plantation is known for its stellar Heritage Education Program, designed to teach students of all ages about life on a plantation in the early 1800s. 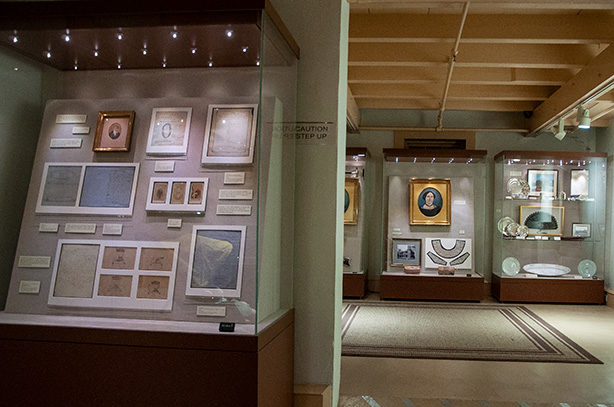 With age-appropriate tours available for grades K-12, keeping kids engaged and learning is a goal at Destrehan Plantation. Tour guides are dressed in period clothing and during a group tour, special activities from the plantation era are often included in the programming. 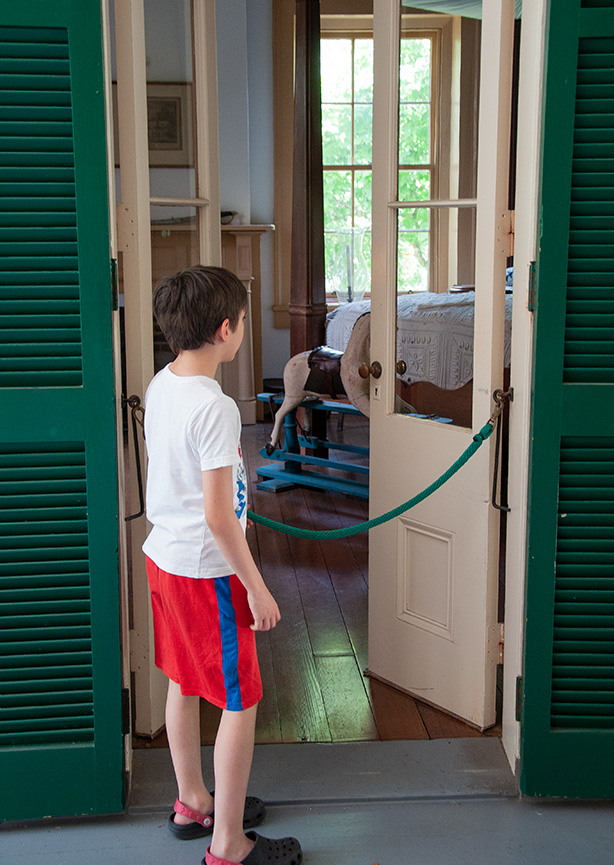 Because teaching children in a fun and educational way is so important to the plantation, that means the tour guides are equally skilled at ensuring families stay engaged when touring the house and grounds. Of the four plantation tours we took, this was my nine-year-old’s very favourite. 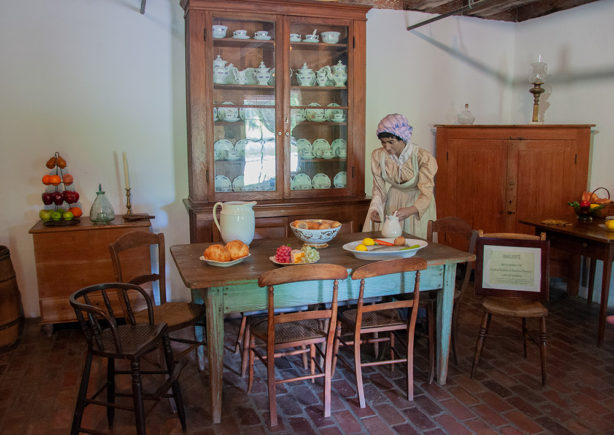 As we journeyed through the house, we had the chance to see an authentic piece of American history, an original document signed by Thomas Jefferson. The boys also loved learning about how their lives would have been different in the 1800s. Zack, at twelve, was excited to learn that he would already have his own apartment outside the main house! 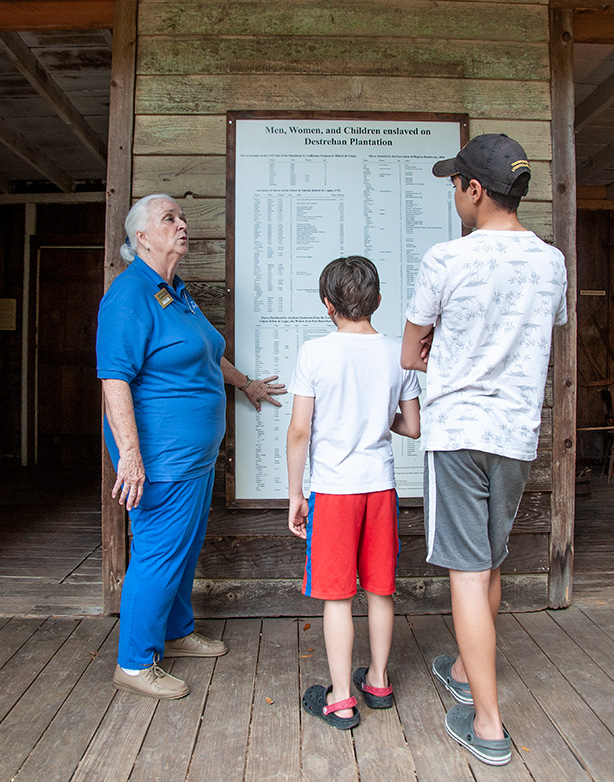 From the details of how slaves were bought and sold to the information about how food was stored in the heat, the two boys enjoyed every moment of learning they had at Destrehan Plantation. Kids are even able to complete a scavenger hunt paper as they take their tour and collect a prize at the end! 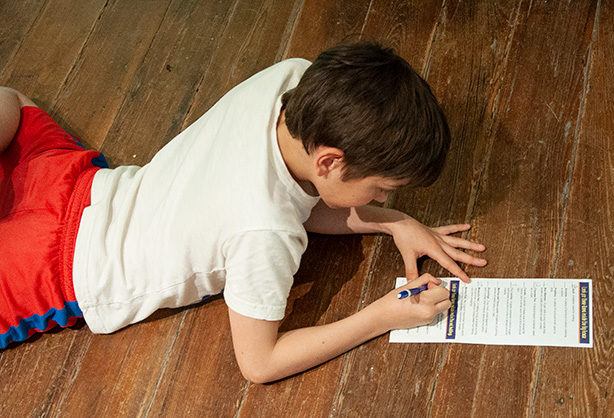 Destrehan was also the plantation that taught us about the largely overlooked 1811 Slave Revolt, since the revolutionaries traveled past the Destrehan Plantation. Its owner, Jean Noel Destrehan, was appointed one of the judges in the eventual trial of the rebelling slaves, and three of the plantation’s slaves were put to death. 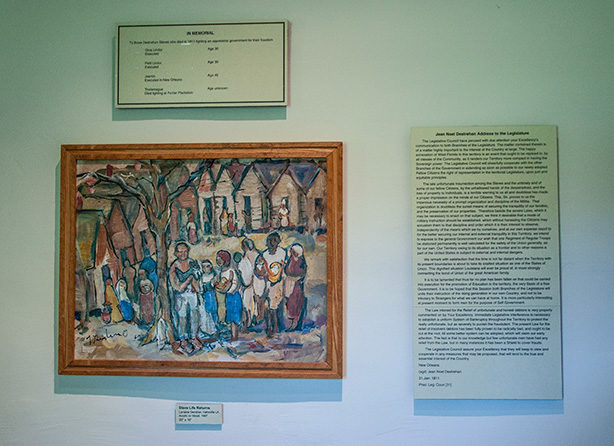 Educational for adults and engaging for children, Destrehan Plantation is a great choice for all ages, and a must-visit for families that want to make sure their children really get the chance to understand just how the plantations operated.

The San Francisco Plantation is an oddity in many ways. Considered by many to be the most unique plantation home in the entire country; it boasts unexpected features at every turn, from its stunning hand-painted ceilings to its blue and white exterior that some say resembles a wedding cake and others say looks like a steamboat. 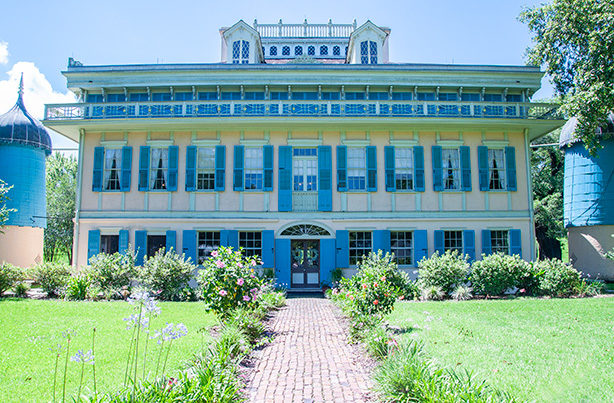 But perhaps the most defining characteristic of the plantation is that it’s known for being haunted by numerous ghosts! The story of the Marmillion family that once lived in the plantation is a tragic one; just thirteen years after Edmond Marmillion established the plantation, his wife died of tuberculosis. Within 20 years, six of her eight children had also passed away.

The remaining two brothers, Valsin and Charles, took over the plantation. But both also died young: Valsin at 44 and Charles at just 35. Valsin’s wife Louise, the one who decorated the mansion so exquisitely, sold the plantation after her husband’s death. She had also lost her two daughters as toddlers while living in the plantation. One had tragically fallen down the grand staircase to her death. 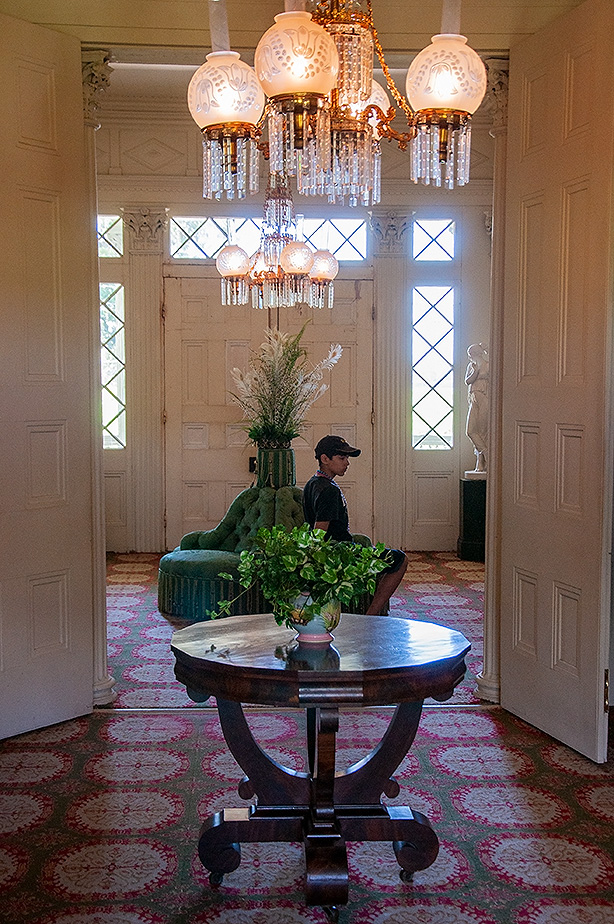 Touring the San Francisco Plantation is an opulent experience; the wealth and beauty of the house is exceptional. And keeping an eye out for any strange visions makes the tour even more engaging. Both Charles Marmillion and two little girls thought to be Louise’s daughters have been seen in the house and on the grounds before. 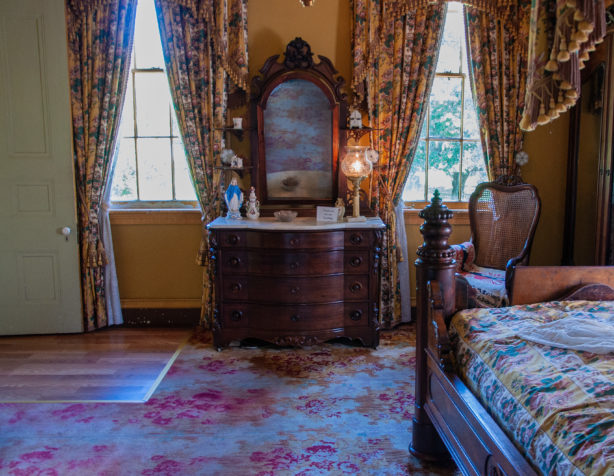 While not all tour guides have stories of their own ghostly encounters, many do. So if you’re interested in some spooky stories along with your education, make sure to ask for a tour guide that has a story or two to tell! And of course, like the other plantations of New Orleans, you’ll enjoy a wealth of information about how the house was built, the lives of its occupants and the lives of the enslaved. 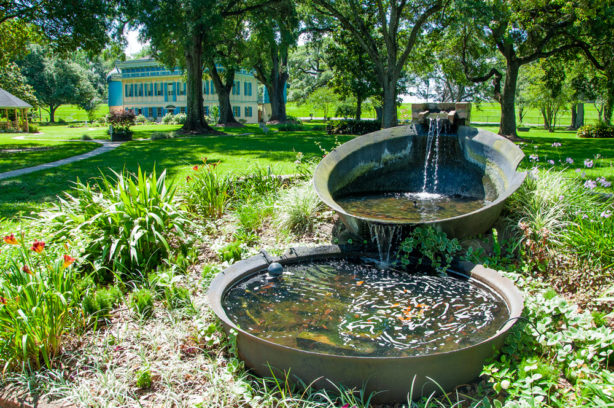 And remembering that is a way to honour the slaves’ sacrifices and their contributions to the state of Louisiana, as well as to remind ourselves that we should never be content to enjoy privilege and comfort that comes at the expense of another human being. 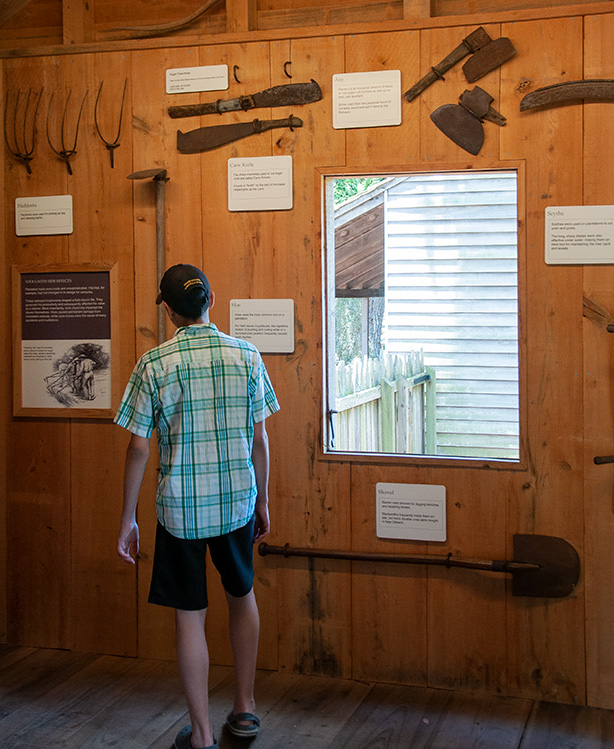 Every one of these plantation tours offers something unique and every one is worth visiting. But if you only have time to take one tour, use this info to help you decide which of the plantation of New Orleans is best suited to you. The tour is sure to be an experience that you’ll remember for years to come. 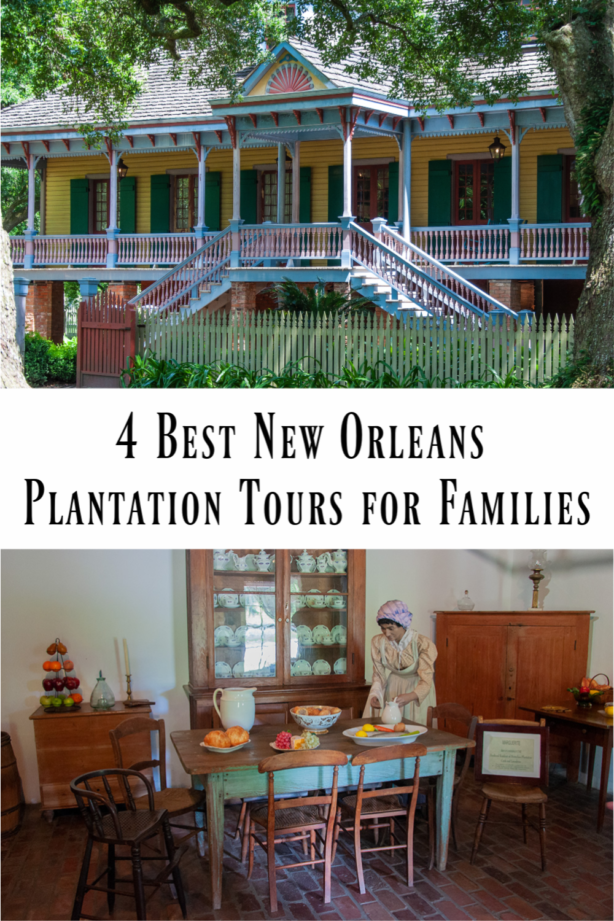