One of my favorite things about cooking is discovering recipes from other countries, and Solyanka soup is the perfect example of that.

This famous soup is popular in both Russia and Ukraine, and is a hearty dish with a smoky and sour flavor.

There are meat, fish, and vegetable (usually mushroom) versions of Solyanka, but the meat-filled version is by far one of the most popular. 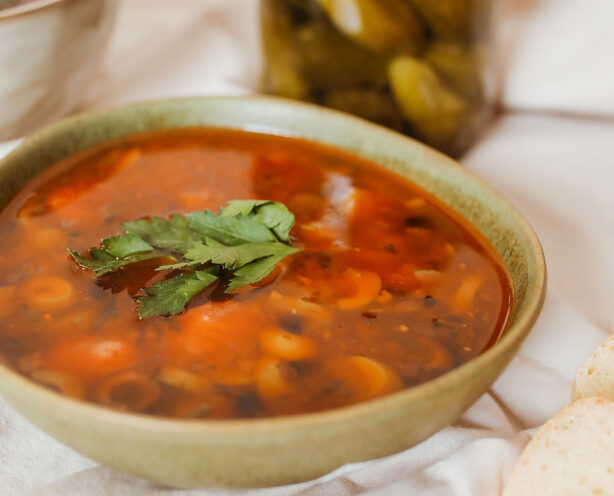 The distinctive salty and sour flavor of the broth comes from the vegetables that are added to the dish, which include pickles and olives. Paired with at least three types of meat, it’s a hearty, filling meal when served with crusty bread on the side.

In Russia, Solyanka soupgenerally features a beef broth as its base. Any variety of meats can be added to it, including ham, bacon, sausages, and chicken.

In fact, in the past, the dish was often made with Russian Doctorskaya, a boiled Bologna-type sausage. This was probably due to a shortage of higher-quality meat during the Soviet era.

Like many popular recipes, the exact origin of this delicious soup and how it got its name is unknown. Some people claim the soup was originally called Selyanka, essentially a “peasant’s soup.”

Others say that the name is derived from the Russian word for salt, as the preserved vegetables and meats in the soup do make it quite salty.

Regardless of the soup’s exact origin, one thing is certain. While there are endless variations of this popular Russian soup, all of them feature a sour and salty broth that sets it apart.

The First Mention of Solyanka

The first known mention of Solyanka was found in the Russian book Domostroi, a household bible of sorts that was published at the beginning of the 15th century.

It was often served as an appetizer before the main meal, and was a renowned hangover cure among many thanks to the heavy concentration of salt and fat in the dish.

While making Solyanka isn’t hard, it does take a bit of time, especially if you plan to make the beef broth from scratch.

If you prefer, you can substitute canned or ready-made beef broth for the homemade broth to streamline the process.

Using a food processor to chop the vegetables is also a great option for putting this soup together quickly. 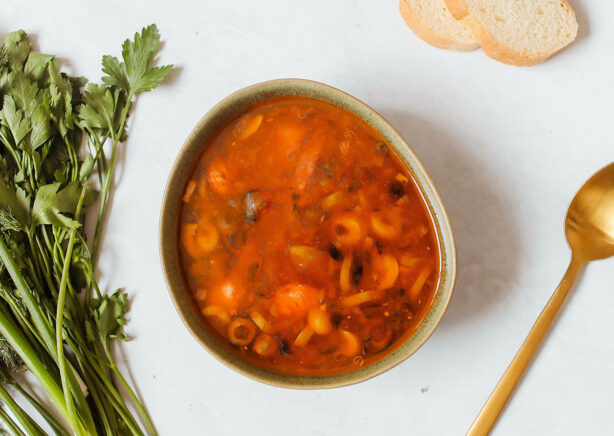 How and When to Eat Solyanka

This authentic Russian soup can be eaten as an appetizer or main course. It, like many Russian soups, is usually served with sour cream and chopped herbs on top.

This popular dish can be found in Russian restaurants, and frozen in Russian supermarkets for those who don’t want to make their own soup.

But you may just be surprised at how fun it is to make it on your own, especially once you try the appealing combination of smoky, spicy, and sour flavors for yourself!

Looking for other soup recipes? This Vegan Lentil Vegetable Soup is a great lighter soup choice!

If desired, six cups of beef broth can be used instead of homemade broth. In this case, cook stewing beef just until tender.